When Japanese high school student Yukari Namikoya finds herself suddenly and inexplicably on another planet, she must quickly come to terms with the fact that she may never see Tokyo again. With a sun that never sets, the desert world of Crimson Winter is on the brink of extinction and day-to-day survival can be difficult; especially for someone used to the modern-day conveniences of Earth.

Following the only clue she has to a way home – a cryptic message from a woman long dead – Yukari heads into the desert searching for the Temple of Sapphire. There, she finds the temple in ruins, but what waits there for her is her destiny as a Chosen of the gem god Sapphiros.

Stranded on this new world and hunted by the Vile Emperor and his vast forces simply for being what she is, Yukari has no choice but to learn how to fulfill the role she’s been cast into and become the long-awaited saviour of a dangerous planet she doesn’t yet understand. 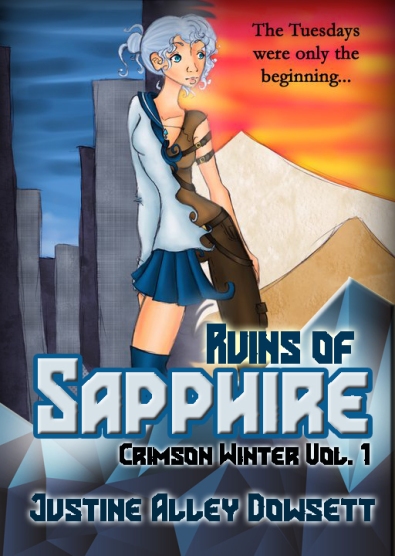 Follow the Tour to Read Exclusive Excerpts, Reviews, and Guest Posts. Make sure to enter the giveaway, too!!

I awoke to the sound of the alarm on my cell phone.

Confused and muddled by sleep, I reached for it and put my glasses on to read the display.

Something told me today was going to be much the same as the last. I snapped the phone shut in disgust, silencing it. It rang again as soon as I had done so.

I stared at it astounded for a moment, then I read the screen. Hotaru-chan’s residence.

This, at least, hadn’t happened before. I answered it. “Hotaru?”

“Uh huh,” she answered in an uncertain tone. I marveled that she didn’t sound sleepy this early in the morning. “Um, Yukari-san, you haven’t noticed anything weird, have you?”

I was cautious in revealing my insanity, even to Hotaru who might be the only person to believe me – my friend had a very active imagination.

“Hotaru, I just woke up,” I informed her steadily.

“Yeah, well me too…it’s just that…well…” She floundered. “Are you sure you haven’t noticed anything strange…” She took an audible breath. “Over the last couple of Tuesdays, maybe?”

“Um,” I hesitated, which is rare for me, “you mean the way that Tuesday just seems to keep repeating itself?”

“So it’s true then…what should we do, Yukari?”

So I wasn’t the only crazy person. Hotaru, someone I had known my entire life, was here with me. Somehow, knowing Hotaru, that was only a small comfort. Growing up together, anytime something had occurred that Hotaru couldn’t grasp or keep up with, she would turn to me. I was smart, she said, so I would know what to do. Well, generally she was right – I just wished this time could be that simple.

“Meet me outside the gates at school,” I said, sounding more confident than I felt. “We’ll figure this out.”

“Do you think anyone else realizes this is happening?” Hotaru asked and I realized she had a good point. Was everyone affected, or were certain people just reliving this day over and over again to some purpose? There was only one way to find out.

“We’ll look into that too. I’ll see you at school.”

I finished getting ready and I hurried to the gates. Hotaru looked worried. I greeted her in what I hoped was a reassuring fashion.

“Look,” I said, gesturing, “there’s Kaji and Shuzhue over there. Let’s go and talk to them, and see if they know anything. I’m almost certain Shuzhue is at the heart of this.”

Hotaru nodded, trying to look determined, and together we approached Kaji and his girlfriend as they milled about school grounds, waiting for the bell.

“Sure,” Kaji replied easily as Shuzhue seemed shocked I was addressing them. I guess I don’t have much of a reputation for being social.

Hotaru jumped right in without any of the sensible hesitation she had shown earlier when broaching this subject with me. “Have either of you noticed the odd way this Tuesday seems to be looping? It’s like that anime, ‘The Girl Who Leapt Through Time’.”

Shuzhue grew even more confused, but Kaji seemed to be waiting patiently for me. I made a few calculations in my head. Corroborating Hotaru’s claim would only make whatever I had to say seem implausible and I would run the risk of not being taken seriously. “Chi-san, did you have any plans for after school today?”

This, I could tell, was even more surprising to her. “Um, well, yes actually,” she answered tentatively and Kaji looked at her in surprise. This was evidently something he didn’t know either. Good – I might be getting closer to the circumstances under which she went missing.

“I’m supposed to go with my mom to visit my grandmother.” I frowned, that didn’t seem a likely possibility for a kidnapping.

“Oh,” Kaji said. “How is your grandmother? I don’t think I’ve seen her since last Christmas.”

Shuzhue did not look pleased the subject had come up and truthfully neither was I. Kaji was veering the conversation away from where I was likely to get information about Shuzhue’s disappearance.

“Actually, she’s not well,” Shuzhue admitted reluctantly. “We’re going to visit her in the hospital tonight.”

I opened my mouth to ask her more questions about her plans. If I had the details, maybe I could accompany her there or follow her to see what happened, but as soon as I even thought it –

The words were in my head, spoken by a strange voice. It was unlike anything I had ever heard before or experienced before. The voice may have been robotic, that was the closest descriptor I could think of.

Again? A different voice responded. This one was more guttural and less clearly defined. It was harder to make out.

I shook my head, trying to clear it.

Reset the program. The robotic command was repeated and Hotaru in front of me met my gaze with a shocked expression of her own – she had heard it too. 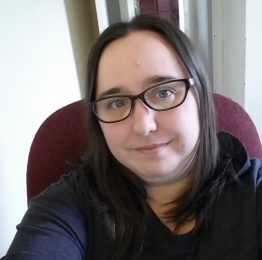 Justine Alley Dowsett is the author of nine novels and counting, and one of the founders of Mirror World Publishing. Her books, which she often co-writes with her sister, Murandy Damodred, range from young adult science fiction to dark fantasy/romance. She earned a BA in Drama from the University of Windsor, honed her skills as an entrepreneur by tackling video game production, and now she dedicates her time to writing, publishing, and occasionally role-playing.