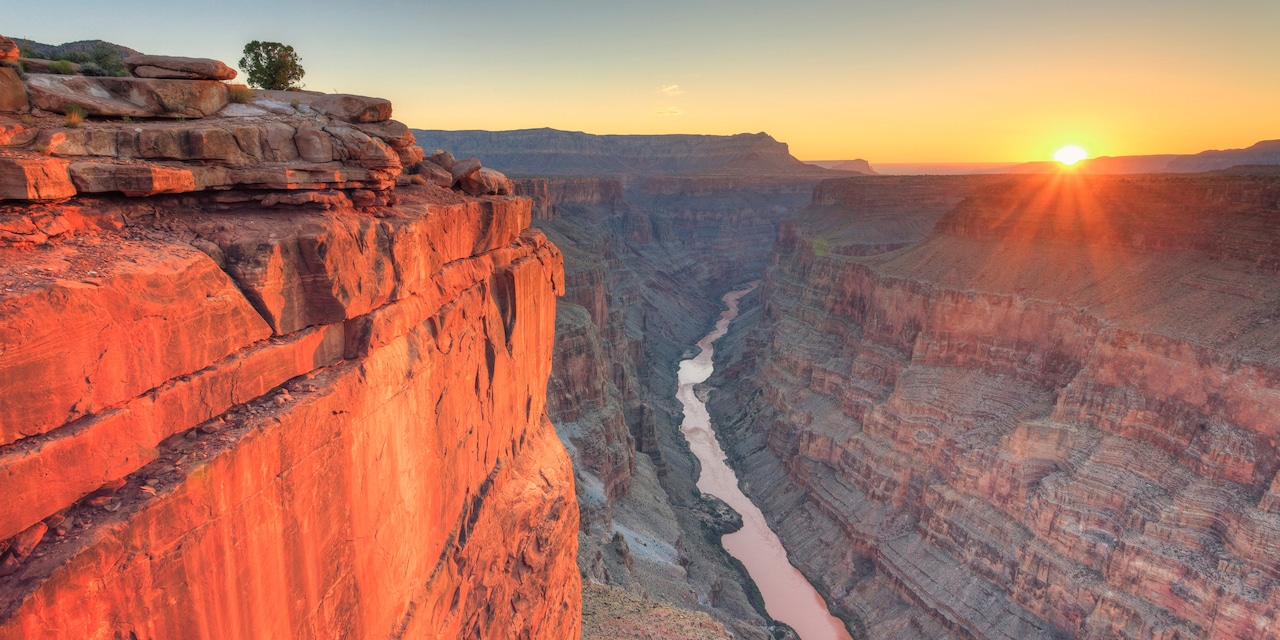 See the beginning of this tale here. Find David McLain and his novel The Time Traveller’s Resort and Museum here. Then, read the rest!

They went to a movie that night, a big budget picture with lots of sword fights or explosions or something, William couldn’t remember which. They had a big bag of popcorn, and a soda, and a box of Raisinettes, and felt a little sick afterward. Then they went out to a club where they listened to loud music and drank cheap beer while they watched young women dance. William told two girls that he had just died, and that Death was Death, and then laughed when the girls said that they didn’t believe him and then watched as the girls went back to dancing with each other. Finally, they got a room at a motel, where they passed out watching television, and slept later than they should have.  In the morning, they got up early, checked out of the hotel, and drove off to the Grand Canyon.

Will had seen the Grand Canyon once, when he was young. For that matter, he was young now. At most, he couldn’t have been any older than twenty-six, maybe twenty-seven. Seeing it now, he felt the same way that he had felt the first time that he’d been there.  It was both as beautiful as anything could be, and almost completely barren at the same time. Suddenly Will thought of something.

“Hey, were you here when this was made?” he asked Death.

“What, the canyon?” Death asked.

“I try not to think about it,” Death said. “But yeah, I was here. It was a sea back then. Ask one of the rangers, he’ll tell you.”

“So, you saw the dinosaurs?” Will asked.

Neither he nor Death said anything. They just stared at the Canyon for about an hour, and then got back on the highway.

It was warm and sunny in the desert, and by mid-day the sun in the car was blazing. Death finally decided he’d had enough. “Pull over,” he gasped. “Let’s put the top down.”

“You think it’s warm enough?” William asked. (After all, it was still January.)

“Open it up,” Death said confidently. “Let’s get some fresh air.”

Driving an English sports car down a highway at sixty-five miles an hour is a little like being Superman, provided that Superman is afraid of heights and prefers to fly eighteen inches off of the ground. The air rushed past the car like it was a jet engine. Heading down a sand dune into the wastes of California, William shouted out like they were going down a roller coaster. Death stood up, and waved his arms.

“Everybody needs to feel the need alive sometime,” Death said. “What am I going to do, die?”

Will had wanted to go to Vegas, but Death figured that by the time they got there they’d be too young to get into a casino without ID, and it would be difficult explaining why it was that Will’s driver’s license listed him as an octogenarian. So instead, they barreled across the open desert, with the top down and rock and roll blasting on the radio. They were young and it was good and everything was wonderful, wonderful, wonderful. They laughed going through Death Valley (which Death admitted he didn’t much care for.) Past the distant suburbs of Los Angeles, and down into the city of LA. If William had to guess their ages, he would’ve probably put them both around twenty-four. They were at the beginning of adulthood, with their whole lives ahead of them.

They stopped near Hollywood and Vine, and looked at the stars on the Hollywood Walk of Fame, and at the footprints in front of Grauman’s Chinese Theater. It was nice, but a little sad, and William could tell that they were just killing time. Finally, they got back in the MG, and drove on out to Santa Monica, where they parked the car at the beach, and walked on out into the water, just as the sun set. William had a feeling that if he asked, Death would tell him that there is nothing as beautiful as the Pacific Ocean, nothing in this world, or any other. They took off their shoes and socks, and watched as the waves hit their feet. Will felt like it was his twenty-second birthday. He felt incredible, but he knew it wasn’t meant to last.

“I’m going to miss it all so much,” he admitted, and he knew that no matter what he looked like, he was an old man. A tear ran down his cheek, but only one. He brushed it away. He knew that the hard part was over. Whatever happened now, he could handle.

“I thought you might want to see it all,” Death admitted. “One last time.”

Will turned around and faced the ocean. The sun was just sinking into the horizon. Even now, you could see Venus, and some of the bright stars peaked out through the streaks of orange and red.

Death didn’t answer at first. Instead, he pointed westward, not quite toward the sun, but not quite away from it either, and William realized that wherever they were going, they were leaving the world behind.

“That way,” Death said. “First star to the right, and straight on till morning. It’s going to be O.K. Just trust me.”

“I really will miss it,” Will admitted. “It was beautiful.”