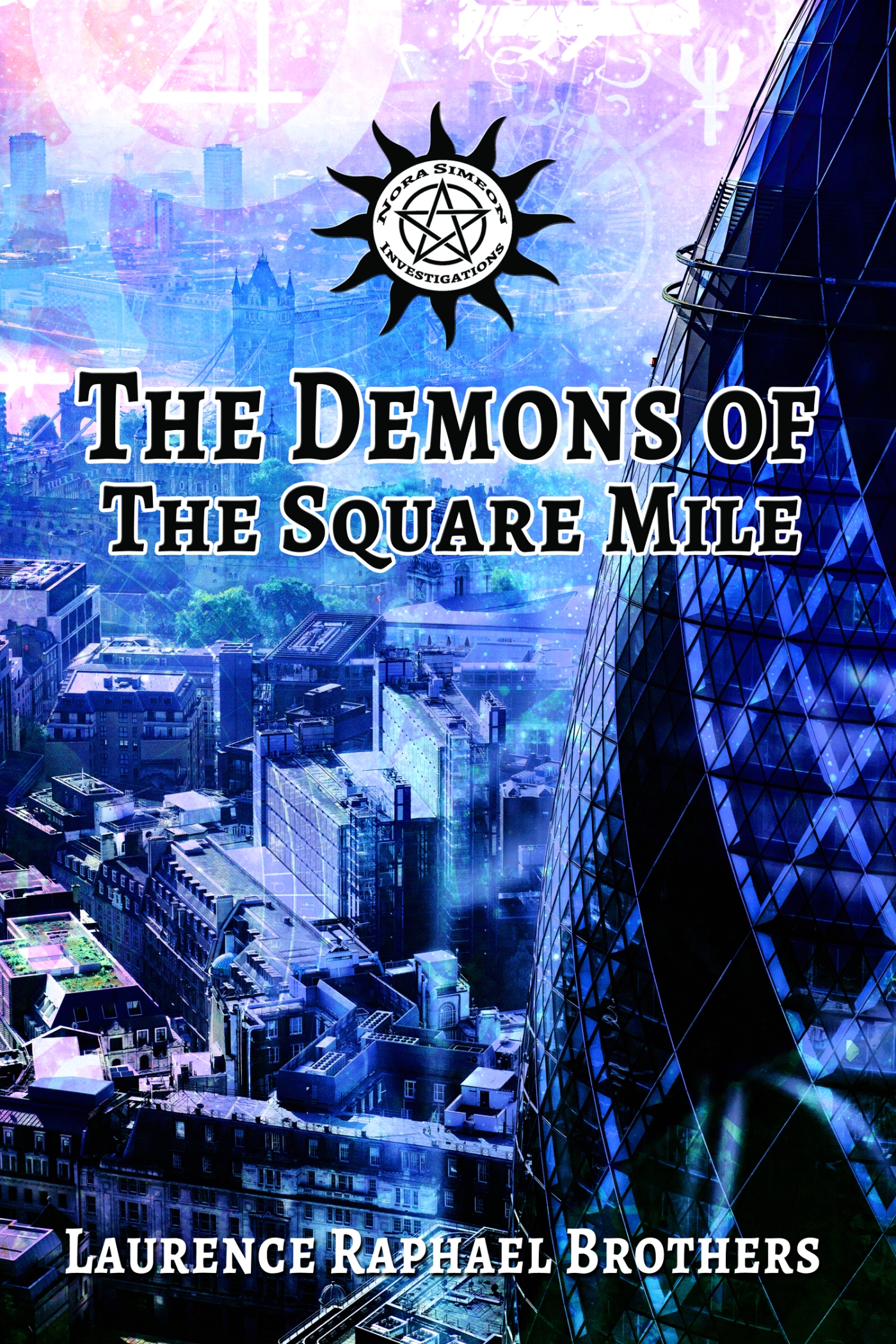 Laurence Raphael Brother’s next instalment in the Nora Simeon Investigations series, The Demons of the Square Mile, launches next week, March 17th, 2021 (though you can pre-order if our store now, here). In celebration of that, Laurence is here to tell us all about the Templars and Demons in his fictional world. Take it away, Laurence!

Of course, everyone’s heard of the Knights Templar, perhaps due to the Assassins’ Creed games or the Dan Brown novel. Most people know their general outline, too. Organized in the aftermath of the successful First Crusade in the 12th century, they served as soldiers and administrators in the occupied territories of the Levant that had been conquered twenty years before and ate high on the hog for over a century until they were brought crashing down in just a few months by the combined malice of a king and a pope. The latest Nora Simeon adventure, The Demons of the Square Mile, winds up deeply involved with the Templar heritage in London; this little blog post gives some additional background for interested readers.

Socially, the Templars served two important roles for the nobility of Europe. First of all, for the devout believers who wished to fight for what they were convinced was the good and the right, the Templars provided an organized military, formally blessed by the church and universally recognized as leaders in the fight against the “paynim”. Second and more importantly, for the great many nobles who preferred not to risk life and limb in foreign lands fighting for a cause to which they were not personally committed, a public donation of wealth to the Templars was an acceptable way to avoid this dangerous prolonged service without seeming to be a renegade or enemy of the Church.

As such, the Templars rapidly grew very, very rich, so wealthy that the nobility of Europe became jealous of their power and resentful of their ability to call in debts even against monarchs, something that ordinary moneylenders were utterly incapable of doing. Increasingly the Templars were associated with banking and clerical matters rather than military affairs, especially after the crusaders were expelled from the Holy Lands by Saladin the Great and other Muslim leaders later in the 12th century. And yet the Templars kept on collecting money and members despite these crushing military reverses. Their priories and banking establishments became ubiquitous in Europe and all business soon became intertwined with their undertakings. With increasing wealth and power came arrogance and corruption as well as vulnerability, and so by the end of the 13th century the Templars were ripe for a takedown, delivered at last by the vindictive Philip IV of France in 1307 in cooperation with Pope Clement V.

Charged with heresy, devil-worship, mass conversion to Islam, and sodomy, the order was rapidly dismantled despite the almost perfect lack of real evidence for any of these offenses. It was said they worshiped in orgiastic private rituals a devil called Baphomet (no doubt a naïve corruption of Mahomet, a form of Mohammed). Many Templars were forced to confess or recant their supposed sins after extended torture sessions; others changed identities and went into hiding. Some Templars refused to confess even after torture and were burned at the stake.

But of course such a huge and wealthy organization couldn’t just vanish. Many of its priories and other elements were eagerly incorporated by other groups, including the Knights Hospitallers, still in existence today as a charitable order of the Catholic Church (as well as in a dozen false forms operated by swindlers; beware should you receive an invitation to membership). There have always been stories of hidden vaults of vast wealth husbanded by secret groups of Templars sworn to seek vengeance on Philip and his line down through the generations. Everyone from the Jesuits to the Illuminati to the Masons has been claimed to be their heirs. A riper subject for conspiracy theory could hardly be imagined down to the present day, with authors from Maurice Leblanc to Umberto Eco to Dan Brown and Raymond Khoury, to, well, me, latching on to their allure.

There’s a curious confluence between international banking, one of the central elements of the Nora Simeon stories, and the Templars in England, and with the British legal system, too. With great wealth comes the need for many accountants, as well as many lawyers. Prior to their fall, the Templars must have had the greatest concentration of both types of professionals in all of Europe.

As it happens, the barristers of the United Kingdom, the special class of lawyers who argue cases before a judge, are all members of the Inns of Court, four ancient societies under whose auspices all the chambers — barrister law firms — are managed. Two of those Inns are the Middle and Inner Temple, named of course after the Templars who once owned the London land on which these chambers currently lie, and whose membership undoubtedly supplied a substantial percentage of the clerical class from which the Inns were formally established in the 14th century. Indeed, the most famous legal document in English history, the Magna Carta of 1215, was drawn up by clerks under the management of the first Earl-Marshal who, lacking any staff of his own, could only have found his legal and clerical people working as Templars in their priory on this very ground.

So while it may or may not be the case that secret cells of devoted, sworn Templars persisted in England after the order’s dissolution, it’s certainly the case that former members and associates and their heirs continued to work as bankers and lawyers, no doubt with erstwhile Templar gold as their working capital. It’s not much of a stretch to suggest that the local wealth of the Templar chapter in London became the basis for all of British banking in later centuries. Indeed, it’s still the case that the leading British financial institutions concentrate their headquarters within the Square Mile, which encompasses the Inner and Middle Temple, but rather magically doesn’t actually include it. To this day, the temple districts are a liberty of London which only accepts the authority of the City of London government (itself an isolated administrative enclave not technically part of the mayor’s jurisdiction) by voluntary agreement. And if you visit these hallowed grounds as a tourist, just like Nora and Eyre you can look into the Templar-built Temple Church at the heart of the Temple district, though I’m afraid you won’t be allowed into the basement, probably for no reason of conspiracy or sorcery. Probably.

One thought on “Templars and Demons by Laurence Raphael Brothers”