There is no moving forward without first going back.

Lilith was a young girl with dreams and a family before the final destruction of Atlantis shattered those dreams and tore her family apart. Now refugees, Lilith and her father make their home in the Black Land. This strange, new country has no place in Lilith’s heart until a beloved high priestess introduces Lilith to her life purpose-to be a Timekeeper and keep time safe. Summoned through the seventh arch of Atlantis by the Children of the Law of One, Lilith and her newfound friends are sent into Atlantis’ past, and given a task that will ultimately test their courage and try their faith in each other. Can the Timekeepers stop the dark magus Belial before he changes the seers’ prophecy? If they fail, then their future and the earth’s fate will be altered forever.

Legend of the Timekeepers by Sharon Ledwith is a prequel to the teen time travel adventure series, The Last Timekeepers. If you’d like to pick up a copy of this book in ebook or paperback form, please visit our store, or Amazon, or wherever books are sold!

And here is the prologue:

“I have decided. We are leaving Atlantis by the end of the week.” Lilith raised her head from the scroll she’d been studying. Had she heard her father correctly? We’re leaving Atlantis?
A tremor shook the small marble table where she was sitting. Two embroidered chairs near the open porch vibrated across the white floor until they smacked into a column decorated with gold and silver butterflies. The wide chairs fell back with a clatter. Lilith braced herself, knowing that her unstable country was falling apart bit by bit. She ducked under the table just as a bronze tile fell from the ceiling and missed her head.
Her father gasped. “Lilith! Are you all right?”
Dizzy, she patted her head, making sure her ivory hairpins still held her long, fair hair in place. “Yes, Father, I’m fine.”
“Segund, I told you to leave a week ago!” her uncle shouted as he entered the room. “If I had a child as young as Lilith, I would have had her on the first boat out of Atlantis!”
Lilith got up so fast her vision blurred. She shook her head vigorously. “I am not a young child, Uncle Kukulkan!” She stomped her foot for effect, almost knocking off her palm-leaf sandal. “I’ll be ten soon!”
Kukulkan grinned at her. His long, full red beard bristled and he soothed it with a large, tanned hand. Then his face turned serious. He walked toward Lilith, his shadow engulfing her smaller frame, and crouched to meet her eye to eye. Matching sea-blue eyes stared at each other before her uncle raised his hand to adjust a dislodged hairpin. He sighed deeply, then with his long thumb, he grazed her high cheekbone and let it run down the length of her face to tweak her firm chin.
“Your mother, Meg would be proud of you, Lilith. My wife would have been as well. Unfortunately, they were taken away from us far too soon.”
Tears welled in Lilith’s eyes. She’d lost both her mother and her Aunt Ambeno about a year ago while they were inside one of the amphitheatres in the City of the Golden Gates during a terrible earthquake. A huge marble statue of Belial fell and instantly crushed the group of people standing under it. Her mother and aunt had been among them.
“Leave the past in the past, Kukulkan.” Segund waved a hand. “It is what it is.”
Kukulkan stood and turned toward Segund. The two brothers were almost identical in stature and looks, except her father’s hair was the color of the sun and his beard wasn’t as full and long. Lilith allowed herself a deep breath. Father looks so tired. His broad shoulders sagged more and more lately, and his crinkled white linen shirt and dark blue pants looked like they hadn’t been washed in days. He twisted the thick, gold ring in the shape of a snake on his middle left finger long enough to notice Lilith staring at him and stopped.
Kukulkan patted her father’s shoulder. “I’m sorry, Segund, I know you have an important job trying to organize the evacuation of Atlantis. Your eyes and face tell me you are weary. Did you manage to get all of the arches to safety?”
“Only the seventh arch, so far. The rest are prepared and ready, awaiting shipment to the other destinations I have chosen. I have decided that Lilith and I will be going where I sent the seventh arch.”
Lilith narrowed her fair brows. “Where’s the seventh arch gone, Father?”
He smiled, revealing his pearl-white teeth. “To the Black Land.”
Did I hear Father correctly? The Black Land? Lilith balled her fists and slammed them against the sides of her slim hips. “But…but, Father, there are snakes in the Black Land! Poisonous snakes with hoods that make their scaly, ugly heads bigger! I am not going there! I want to go with Uncle Kukulkan!”
Kukulkan stifled a chuckle. Segund gave his older brother an angry stare and turned his attention back to Lilith. “Now, Lilith, you’ve simply got to get over this fear of snakes you have. After all, we are known to the world as the Serpent People.”
Lilith pursed her lips. “That’s because of the human-snake hybrids the dark magi created!”
“That is not the reason, Lilith,” Segund said, tapping the tip of her nose. “Serpents know the earth better than any other creature and Atlanteans understand this. Serpents teach us how to transmute the poison of our experiences into healing energy to share with the rest of the world.”
“Your father is correct,” Kukulkan said. “Besides, there are snakes living in the western land where I’m going too. Long, thick snakes that wrap around your body and slowly squeeze you to death before they eat you.”
Lilith squealed and covered her mouth.
Segund slapped his brother across the back of his head. “You’re not helping, feather-brain!”
Kukulkan rubbed his head. He winked at Lilith. “Don’t worry, Lilith, your father will keep you safe from these poisonous, hooded snakes.” 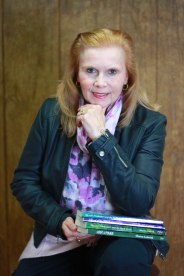 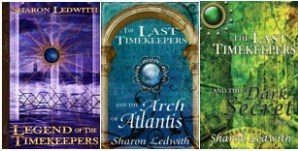 Sharon Ledwith is the author of the middle-grade/young adult time travel adventure series, THE LAST TIMEKEEPERS, and the teen psychic mystery series, MYSTERIOUS TALES FROM FAIRY FALLS. When not writing, researching, or revising, she enjoys reading, exercising, anything arcane, and an occasional dram of scotch. Sharon lives a serene, yet busy life in a southern tourist region of Ontario, Canada, with her hubby, one spoiled yellow Labrador and a moody calico cat.

3 thoughts on “Legend of the Timekeepers by Sharon Ledwith, Prologue – Part 1”