The FAQ series continues! This time I asked Sharon Ledwith, author of the young adult time travel series, The Last Timekeepers and the teen psychic mystery series, Mysterious Tales from Fairy Falls, what question she gets asked the most when people find out she’s an author. Here’s what she had to say:

Where can I get one of those time portals from Atlantis? LOL! Seriously though, I had to put on my thinking cap for that question, and I actually came up with two frequently asked questions, whether it’s from students during school visits or readers I meet at book fairs or craft shows looking to add to their TBR pile. Drum roll, please…

How do you come up with your ideas?

Well, the idea for The Last Timekeepers and the Arch of Atlantis came to me in a dream I had around 1998. In this dream, I saw seven arches, and there were seven people (five kids, two adults) with crystals in their hands, walking up to these arches. It definitely had an Indiana Jones feel to it. But to be honest, ideas come to me naturally, whether they’re in my dreams or I’m sitting watching a television show, doing housework or walking the dog. I love all things time travel and mysterious, so I naturally fell into those genres. I also love myths and legends—where did they come from, are they real, is there a smidgen of truth to them? I’d like to think so. Atlantis is one of my favorite myths to play with, and the arches I saw in my dream looked as if they could have come from this lost continent.

How long does it take you to write a book?

Groan. It actually varies depending on the amount of research needed for each book. For instance, I started gathering ideas and writing the first draft of The Last Timekeepers and the Arch of Atlantis between 1999 and 2001, which took me just over a year to write. The hardest part was finding a publisher. I finally signed a publishing contract for the first book in The Last Timekeepers series in 2011 with a now defunct publisher, which required major revisions on changing my point of view over from five characters to one character. Thankfully, I was later picked up by Mirror World Publishing in 2015, and haven’t looked back. I wrote The Last Timekeepers and the Dark Secret, the second book in The Last Timekeeper series between 2001 and 2003. Since this novel takes place during World War Two, there was lots of research and fact checking! The prequel to the series, Legend of the Timekeepers was the hardest to write because I had never tackled a full-blown fantasy before—no history facts to go on, just speculation. Believe it or not, that book took me under a year. Gotta love using your imagination! Currently, I’m working on the third installment of the series entitled, The Last Timekeepers and the Noble Slave, which has taken me the longest to write since I started planning the novel in 2016. I’m about two-thirds done, and still have some research to finish up. To be fair, I did launch another young adult series called, Mysterious Tales from Fairy Falls since then, so I’m cutting myself some slack. Wink.

Here’s an excerpt from The Last Timekeepers and the Arch of Atlantis:

Amanda Sault silently studied the words she’d just scrawled: May 1st, 1214—Games and songs and revelry, act as the cloak of devilry. So that an English legend may give to the poor, we must travel to Nottingham to even the score.

She frowned. She was the Scribe. She was supposed to understand what this riddle meant, but she didn’t have a clue. All she knew was that she, her four annoying classmates, and two offbeat adults were standing in what was left of the lost continent of Atlantis and they were supposed to be the Timekeepers, the legendary time travelers handpicked by destiny to keep Earth’s history safe from evil. But no one had told them how they were supposed to do it.

Their problem: no matter what happened—good or bad—they weren’t supposed to mess with the past. Period. Dot. End of story. Amanda felt hot liquid build in her throat. Her thumb traced the words of the arcane riddle. Their first Timekeeper mission. Amanda knew this wasn’t the end of the story.

This was just the beginning.

If you liked that, you’re in luck! You can pick up the first book in Sharon Ledwith’s Timekeepers series FOR FREE with the promo code: TIMETRAVEL until 07/01/2019. Go Get it!!

If you would like any of Sharon Ledwith’s other books, look here:

The Last Timekeepers and the Dark Secret, Book #2 Buy Links:

The Last Timekeepers and the Arch of Atlantis, Book #1 Buy Links: 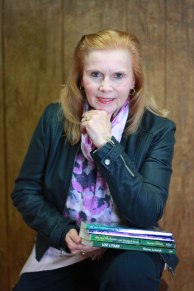 Sharon Ledwith is the author of the middle-grade/young adult time travel adventure series, THE LAST TIMEKEEPERS, and the teen psychic mystery series, MYSTERIOUS TALES FROM FAIRY FALLS. When not writing, researching, or revising, she enjoys reading, exercising, anything arcane, and an occasional dram of scotch. Sharon lives a serene, yet busy life in a southern tourist region of Ontario, Canada, with her hubby, one spoiled yellow Labrador and a moody calico cat.

2 thoughts on “FAQ Series with Sharon Ledwith and The Last Timekeepers!”