If you’re just getting started, please read Part 1 first. If you’re all caught up, please continue!

Cruising along, the Majestic gave no indication of stopping or slowing as the small cargo vessel approached the rendezvous point. Static crackled over the newly installed comms system. “Nell, we have a problem.”

Nell lazily reached her tail over to the comms control panel. “What’s the issue, Susan?”

“Can’t you feel that?” Sue, their acting engineer on loan from their former captain, James Claw, asked as Nell felt the Majestic’s engines stutter.

“Of course I can feel that!” Nell protested. “What do you want me to do about it? You’re the engineer!”

If Nell was being honest, she was enjoying herself. Before leaving Ulatwam’s facility on Luna, they had decided to make every part of their excursion look as legit as possible on the off-chance that anyone was paying attention. That included having an accurate comms-log to back up their story later.

“I need to calibrate the left engine,” Sue continued, “and to do that, I need to land.”

“Uh, we’re not exactly in a position to do that,” Nell responded, snickering to herself once she muted the comms.

“You don’t want a repeat of what happened last time, do you?” Nell could hear the irritation building in Sue’s voice. “Just get me somewhere I can work!”

The comm system went silent. That was Nell’s cue. She eyed the asteroid’s surface and after a moment noticed the tiny flashing light that was their signal. Here goes.

Nell slowed the Majestic and brought it in, matching pace with the asteroid before lowering them to its surface. She didn’t land the ship so much as she hovered near the surface while below-deck, Xendri and Quattro, suited up for open space, opened the cargo bay doors and guided their passengers in.

Nell waited a tense fifteen minutes or so before Xendri climbed up into the cockpit beside her and gave her the thumbs up and a grin through her helmet.

“You all set there, Susan?” Nell gave the pre-arranged call sign to indicate that they were ready to depart.

Nell nodded and set her jaw as she pulled the Majestic away from the asteroid. And that was the easy part. Now to get these people past the Council’s prying eyes…

A few moments later, Nell was surprised by the addition of a third person in the cockpit of their ship. Dressed head-to-toe in a black armoured space suit, the person’s species and gender were nearly impossible to determine, but when she spoke, her voice was undeniably female. “Captain Droon sent me up here as his representative. I’m to man your scanners and comms to make sure we’re not detected.”

Xendri frowned at this. “I told him expressly that none of his people were allowed in the cockpit.”

“I was hoping you would make an exception for trained personnel,” a male voice suddenly interjected from the open doorway that led to the rest of the ship. “She can be of use.”

Xendri seemed to swallow her complaints, but her eyes were narrowed. “Well, the scanners are over there,” she said, pointing to the station on Nell’s right, “and the comms are over there,” as she pointed to the opposite side of the cockpit. “So take your pick.”

The armoured woman nodded, taking a seat at scanners, and Captain Droon departed as swiftly as he had appeared. Nell eyed the newcomer out of the corner of her eye; the jump gate leading out of the Terran system still a ways away. “I’m Nell,” she stated, “and you are…”

There was a long pause before the woman’s voice came tentatively out of her helmet’s speakers, “Elise.”

“You ever play Pentaurii Queens?” The woman looked up from what she was doing to regard Nell in what she translated as a curious manner. “Well, we’ve got a long jump gate ahead of us, and in my experience those get a little boring if you don’t have something to do…”

“I’d love to,” Elise’s tone softened. “Once we’re in the Jump Gate of course.”

“You know this scanner is…well, very limited in its range, right?”

“And it’s got a…blind spot. It’s like it doesn’t pick up anything in the south by southwest quadrant.”

Nell grinned at her. “Yep, and this is the upgraded version. If you think that’s bad, you should see our comms station!” 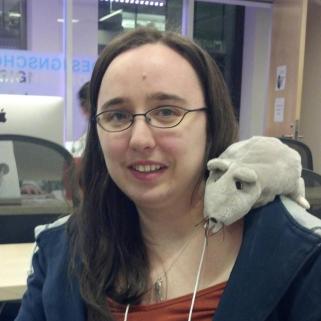 Justine Alley Dowsett is the author of nine novels and counting, and one of the founders of Mirror World Publishing. Her books, which she often co-writes with her sister, Murandy Damodred, range from young adult science fiction to dark fantasy/romance. She earned a BA in Drama from the University of Windsor, honed her skills as an entrepreneur by tackling video game production, and now she dedicates her time to writing, publishing, and occasionally role-playing with her friends.