But who is David McLain? The newest Mirror World author is a bit of a mystery, but we asked him to do an interview and he said yes, so here goes:

So David, where do you find inspiration for your novels?

The inspiration for the Time Traveller’s Resort and Museum most came from people I know, and from literary references that are important to me. I suppose I could have told the story of my life from beginning to end, but the parts of my life that I wanted to write about are not exactly served well by sampling chronicling who they are. I wanted to chronicle who they aspired to be.

Other than writing, what do you do in your spare time?

Every time I finish a book I end up building a model, basically because I have no idea what to do with myself. I also have a dog, and a fish, and a cat that I tolerate.

I have more than one, actually. I don’t like to talk about those days when I put on my dark rimmed glasses and a blue suit and go out to the office as mild mannered employee David McLain. I preferred people picture me when I where my underwear over my pants and go out as writer man.

Are there other authors that you try and emulate or take inspiration from?

I can probably say Douglas Adams without shocking anyone. I’ve read roughly half of William Shakespeare’s Work, all of JD Salinger, and most of Jane Austen and John Steinbeck. I’ve read a great deal about King Arthur too, which you can probably tell from reading the book.

Tell us about your new release:

The Time Traveller’s Resort and Museum is the story of a time traveller who falls in love with three men: One from the past, one from the present, and one from the future. She misjudges them all. It’s also the story of how a myth becomes reality, and reality seems to fade away until it’s a myth. (I probably should have thought of that last bit earlier, it sounds good, doesn’t it?)

Thank you, David! If you’re curious about this crazy ambitious book David McLain has written, now is your chance to get it on sale! Don’t miss out and don’t forget to use the promo code: FEATURE for $3.00 off the ebook, paperback, or hardcover! 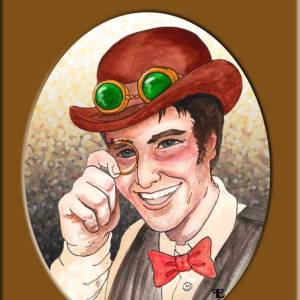 One thought on “Interview with the author, David McLain”